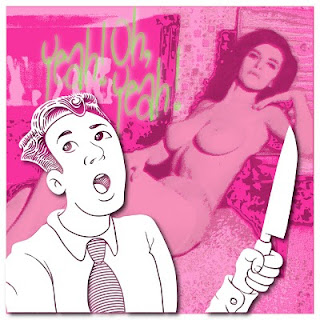 A piece that I submitted to the Open Event 69 cuadros de amor (69 love pictures)
The event is based on the fantastic triple album 69 love songs by The Magnetic Fields. Artist were invited to create a piece based on one song from the album, and multiple entries were encouraged. The only guideline was to stick to a size of 30 by 30cm, which is roughly the size of a vinyl album cover.
The material will be exhibited in Buenos Aires sometime between April and May 2010 and the possibility of a book has been mentioned.
The song I chose is "Yeah! Oh, yeah!" and besides the fact that it cracks me up, I went for it because (to my surprise) no one had picked it up yet!
To check out the song in Spotify click here
I haven't heard the date for the opening yet but I'm looking forward to see what the whole album looks like hanging on the gallery walls
Posted by Beto Jet-O - Illustration at 05:40